A Study in Contrast 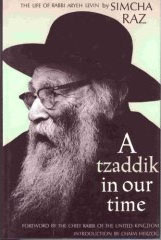 One of the questions we face in life is; why are we here?  For those of us who believe in G-d, the question can be phrased as; what does G-d want from us?   The answer to this question can be summed up in the words of the prophet Micah, who said:  “…what the L-rd demands of you; but to do justice, to love loving-kindness, and to walk discreetly with your G-d.”  With this statement in mind, let us look at the lives of two rabbis, Rabbi Aryeh Levin and Rabbi Yehuda Levin.  As far as I know, despite the same last name, these two rabbis are not related.

Rabbi Aryeh Levin ZT”L was known as a man of great kindness.  His biography, A Tzaddik on Our Time: The Life of Rabbi Aryeh Levin, is filled with story after another of this rabbi’s kindness.  This was a rabbi who spent his entire life looking after the physical, emotional and spiritual needs of others.  He never turned away a person in need.  If someone needed help, he helped him or her.  Many of his acts of charity were done quietly, so quietly that recipients of his charity never knew they were recipients of charity (least a recipient of his charity be embarrassed that they needed and accepted charity).

Many years after Rabbi Aryeh Levin’s death, I read A Tzaddik in Our Time.  Among the many stories of his tremendous kindness, were the stories of Rabbi Aryeh Levin visiting Jewish prisoners on the Sabbath, many of these prisoners being political prisoners of the British.  Months after I read A Tzaddik in Our Time, I received an unsolicited email from the Aleph Institute.  Among the social service programs of the Aleph Institute is their pen-pal program, the subject of the email I received.  That email asked me if I would become a pen-pal with a Jewish prisoner.  If I had not read Rabbi Aryeh Levin’s biography, I would have deleted that email.  Instead, knowing of the rabbi’s many kind deeds, including visiting prisoners, I immediately replied that I would be a pen-pal.  Today, I have as pen-pals almost every (if not every) out, gay, Jewish inmate in the United States that the Aleph Institute knows of.  The reason I tell you this is to show how years after Rabbi Aryeh Levin’s death that his kinddeeds live on, and how decades after his death this kind rabbi is still inspiring others to do acts of kindness.

In contrast to Rabbi Aryeh Levin (Reb Aryeh), we have Rabbi Yehuda Levin.  It would appear (from the numerous press reports and You Tube videos) that Rabbi Yehuda Levin has spent his much of his rabbinical career seeking publicity for himself by spouting outrageous and hateful statements.  The favorite target of his years long hate mongering campaign are gays and lesbians.  Instead of performing acts of kindness, here we have a rabbi who preaches hate and bigotry.   As the prophet Micah has said: “…what the L-rd demands of you; but to do justice, to love loving-kindness, and to walk discreetly with your G-d,” I am forced to ask who is the sinner; a homosexual who is homosexual because G-d made him or her that way and who has no choice about his or her sexual orientation, or a rabbi who chooses to preach hate, not merely preach hate, but preach hate as a way of possible self-aggrandizement?

In conclusion, let me quote from a book review of A Tzaddik in Our Time:

Reb Aryeh was once walking with his grandson, and he asked the boy the following question:"Is it better to be a 'hater of falsehood' or a 'lover of truth'? His grandson did not know how to respond, so Reb Aryeh answered: "To be a lover of truth is a higher level. Someone who hates falsehood will see the falsehood that exists in every person, and he will come to despise them or even hate them, G-d forbid. A lover of truth, however, will see the truth in every person, and he will come to honor them and even love them."

ZT’L means "May the memory of the righteous be forblessing"

Categories: Current Events (and people in the news), Sermon, Gay, Lesbian and Transgender