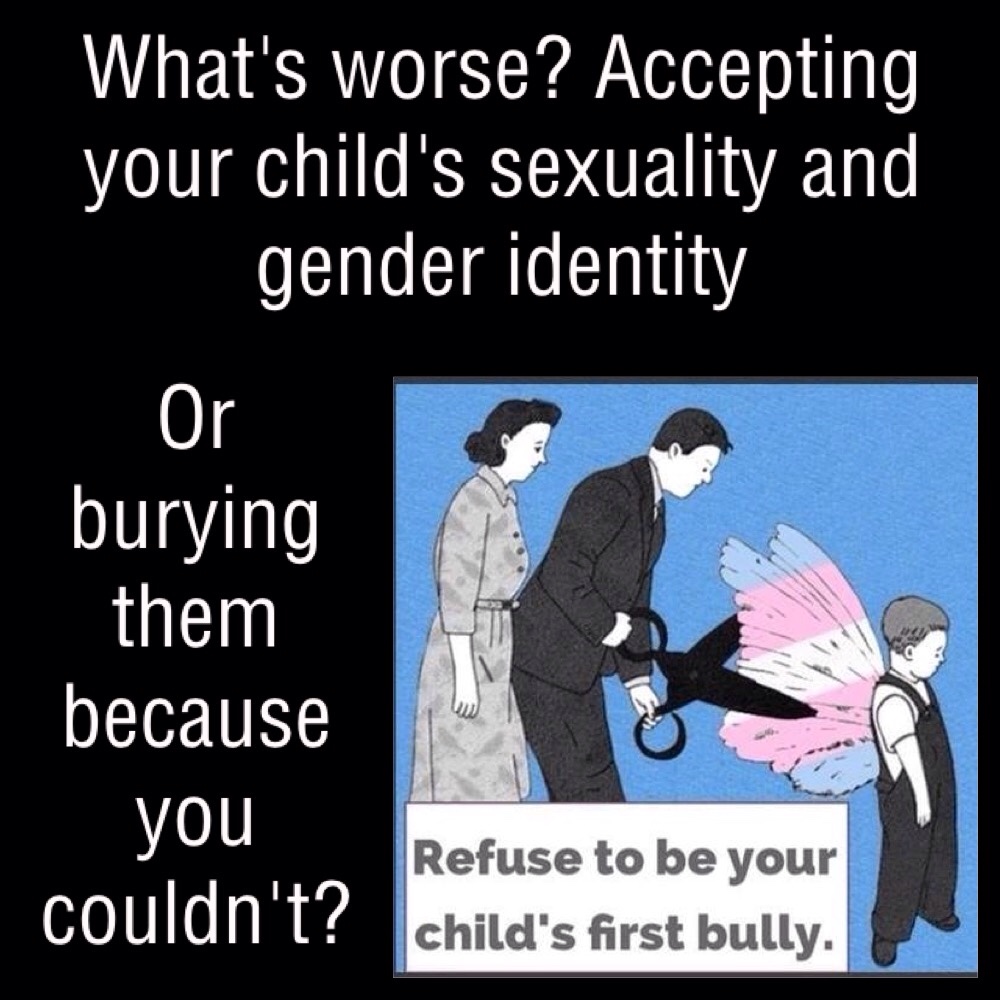 Recently Leelah Alcorn (who was born male and named Joshua Alcorn by his Christian parents) committed suicide in an effort to bring attention to transgender people.

She, Leelah, died at age 17, an unloved child of G-d who was tortured by her Christian parents because she could not be the good Christian boy that they wanted her to be.

They kept her locked in their house, isolated from friends and a support system. They had her medicated on Prozac at three times the recommended highest dose, despite the fact that Prozac has been linked to teen suicide.

They took Leelah to Christian therapists who tried the discredited (and illegal practice in three US jurisdictions) of conversion therapy.

The result of all this alleged G-d fearing torture and abuse is that a child of G-d is dead, and died unloved, despite the parents claims to the contrary.

G-d does not make mistakes. G-d loves all His children.

So how could this tale of torture, cruelty, and ultimately hopelessness so profound as to lead to suicide happen. Was this G-d's will? The answer lies in a great difference between the bible thumping, ignorant, hateful, fundamentalist Christians, and those of the Jewish faith, who labor generation after generation to understand G-d's will. With their keen insights, let us see if G-d meant for this tragic death to happen, or if He had a different intent.

R. Samuel b. Nahman said in R. Jonathan's name: When Moses was engaged in writing the Torah, he had to write the work of each day. When he came to the verse, AND GOD SAID: LET US MAKE MAN, etc., he said: ‘Sovereign of the Universe! Why dost Thou furnish an excuse to heretics?1 Write,’ replied He; ' Whoever wishes to err may err.’ '

Note 1: For maintaining a plurality of gods.

Judaism and Christianity are oft times too very different faiths. Jewish tradition is to ponder, to question, to explore, to study, and to learn what G-d wants from us. Judaism is the tradition of Midrash, of Talmud, of rabbinic commentary. Christianity, especially fundamentalist Christianity, is the faith of unthinking blind obedience to a text that was never meant to be taken literally.

It is with these thoughts that I now turn to Deuteronomy 21:18-23, which discuss executing the wayward and rebellious son. Why am I discussing this passage? I am discussing this because the parents of transgender Leelah Alcorn, who was born Joshua Alcorn, executed her for being a wayward and rebellious son. Now some of you will tell me she was not stoned to death, but died as a result of being hit by a truck in an attempted suicide. Literally, you would be correct. Yet who was it that drove that child of G-d to such an end? Her bible thumping Christian parents, parents who so wanted a good Christian boy, that they engaged in systematic torture of their child, Christian parents who hired doctors to engage in malpractice (prescribing three times the recommended limit of the drug Prozac, a drug known to cause suicide would be malpractice; as would the Christian conversion therapy that is now banned in two states plus the District of Columbia). Now, they killed their child as surely as if they had her stoned to death for being a wayward and rebellious son.

And so we return to those who wish to err may err. G-d does not make mistakes. G-d created Leelah Alcorn and gave her a soul. G-d made her the way G-d wanted for G-d had a plan for that child, and now that child is dead, along with all the hopes and dreams she had.

The Talmud teaches us that no one was ever executed for being a wayward and rebellious son. Too bad Leelah's parents and their clergy could not be bothered to learn the meaning of G-d's holy word.

The mishnah (Bikkurim Chapter 4) has an entire chapter devoted to people who are shockingly similar to Leelah. Why is it that none of the Christians involved in stoning this child of G-d did not know of this chapter?

R. Jeremiah b. Leazar said: When the Holy One, blessed be He, created Adam, He created him an hermaphrodite [bi-sexual],2 for it is said, Male and female created He them and called their name Adam (Gen.V, 2).3 R. Samuel b. Nahman said: When the Lord created Adam He created him double-faced, then He split him and made him of two backs, one back on this side and one back on the other side.

Note 3: Thus Adam himself was originally male and female.

Reply Elliedkkx
11:20 PM on August 7, 2020
There's definately a lot to learn about this issue. I love all of the points you made.

Reply Erintkpy
9:27 AM on August 2, 2020
what to do when viagra and cialis dont work
viagra generic https://viagra-generics.us viagra generic
is there an ed treatment better than viagra and fdc approved

Reply Charliegxnl
3:22 PM on June 28, 2020
My programmer is trying to convince me to move to .net from PHP. I have always disliked the idea because of the expenses. But he's tryiong none the less. I've been using Movable-type on a number of websites for about a year and am anxious about switching to another platform. I have heard fantastic things about blogengine.net. Is there a way I can import all my wordpress posts into it? Any kind of help would be greatly appreciated!